Our third 1-click survey invited your response to the following statement:

You can download a 1-page summary of the results with a graph of EV owners responses here, or if you’re interested, read on and please add to our discussion: 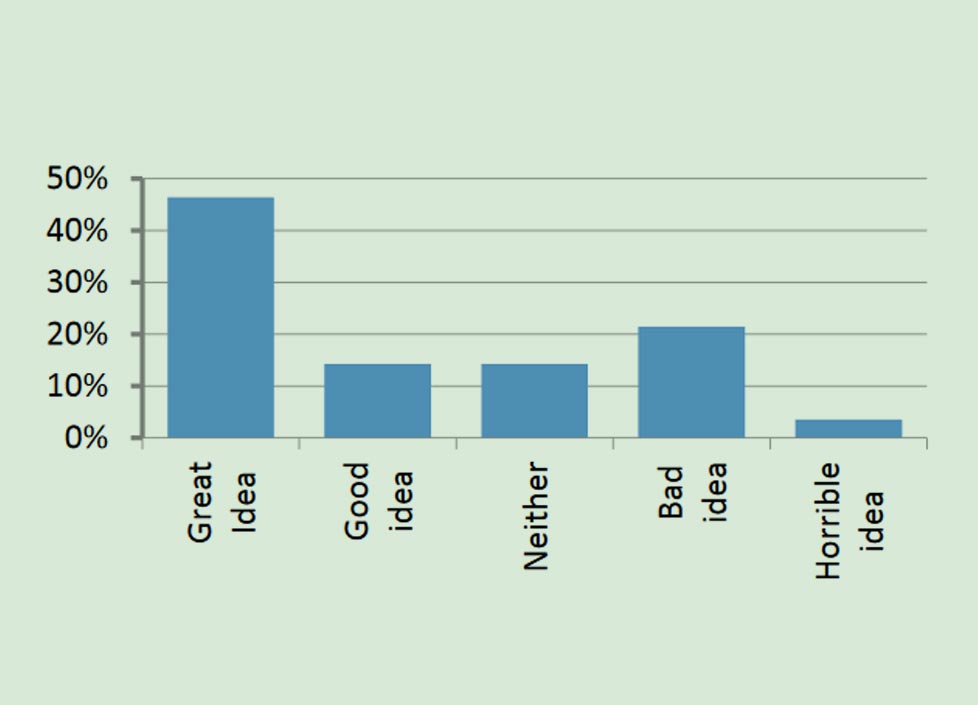 Sample size is small (28 responses) and we are not yet sure how representative the Flip The Fleet software test panel is of all EV owners – so don’t pay too much attention to exact percentage scores. Seventeen respondents (61%) considered lane privileges to be a great or good idea, compared to 7 (25%) who think they are a bad or horrible idea.  There is less than a 5% chance that a difference of this size would arise simply by chance (sampling error), so we can be reasonable confident that the majority of EV owners favour lane privileges.

What strikes us most is that this majority support is predominantly NOT based on self-interest of EV owners wanting a quick commute home after a hard day’s work.  Sure, some respondents consider it only fair and just that EV owners get some reward, but most of the reasons given for supporting the policy reflect general concern for promoting EV uptake and transition to more sustainable transport.

For many respondents, support for lane privileges was qualified by (or even surpassed by) a need to prioritise public and shared transport above EVs, even though EVs should be prioritised above single drivers of ICE vehicles.  Improved visibility of EVs to give people confidence in their utility (even to show they are already amongst us) was a common reason for support in allowing them into restricted lanes.

Read the one page summary for a sample of the most common themes.  Below are additional comments that we couldn’t fit in that summary.

Effective incentive: “I think that giving a very convenient driving privilege would make ICE drivers really think about the EV option” • “If I saw one belting past me in traffic I would certainly reconsider the type of car I would buy next” • “Norway, a similar country to NZ in land area and population, has over 100,000 EVs.  This could be NZ. Use of priority lanes, parking and charging has been the main motivator to many to purchase an Electric Vehicle” •

Increased visibility:  “I bet most NZers won’t yet recognise EVs as they drive past, but this will bring them into peoples’ attention” • “It would also make EVs on the road very visible to other drivers (and envied)”

Constantly reinforced message: “They’ll get increasing reminders of the issue on every commute to reinforce the message”

Starting valuable conversations: “The strategy will help trigger conversations and consideration about switching to EVs amongst the general public, not just amongst the car enthusiasts and environmentally conscious people- its these other people that will be hardest to encourage over to EVs”

The start of something bigger: “It will help set a new tone – where public support for EV uptake is recognised and accepted, and this might open the door for more proactive strategies like exemptions from tolls and parking fees, feebates, financial subsidies– it’s getting the first exemptions accepted that will be the hardest, and allowing EV access to bus lanes is an inexpensive and low impost way to start”.

Local context important: “Good to enable it, whether it makes sense in each local context has to be determined” •“It’s an AKL issue and it is irrelevant to me”

Prioritise public transport: “We need to differentiate between prioritisation over polluting ICE vehicles and negative impacts on public transport” • “Would not be great if it compromises bus or other public transport vehicles” • “Significant hindering of public transport would probably not be a problem for several years, but it will be important that the legislation allows reversibility (i.e. renewed prohibition) if, where and when the problem arises” • “Authorisation for EVs to use the lanes must be on an individual rather than blanket basis so that some lanes are reserved for buses only, while others are shared by EV and buses”

Little impact on special lane users: “The impact on other users is minimal.  Two months ago I drove next to a bus lane for 18km and never passed a bus (and one didn’t pass me).  Much of the day this would be the case”

Priority is to discourage single commuters: “I would accept couriers and businesses that go EV in preference to allowing single commuters in EVs into special lanes” • “There is no incentive in this policy to have more than one person in the EV” • “I counted on a motorway priority lane over 80% of cars with just the driver.  This is far worse than an occasional Electric Vehicle using the lanes!”

PHEVs: “PHEVs could be running petrol or have low proportion of travel in EV driving mode”

Sunset clauses:  “If we are going to use this strategy, it should be right away while the EVs are still relatively uncommon i.e. now when the rewards are greatest and risks lowest – but stay  flexible and make it easy to reverse when EVs rule the roads”

Backlash? “Could fuel negative sentiment towards EVs” • “Any delays to buses due to EV, especially with one person, can have big audience and generate negative views”

Hard to police?  “There may also be a practical problem that it will encourage cheating by ICEs” • “Investment in increased enforcement will be needed at the start”

We will submit the scores and comments summarised above and in the one-pager, and any rejoinders submitted to this discussion blog by 28 January, to the Ministry of Transport’s call for public consultation on the proposal.  That submission will be lodged in the name of the Flip The Fleet project as our first example of collective influence on EV policy in New Zealand.  Thanks for participating!