Your take-home message:  #LeadingTheCharge encourages many people to take the final step to purchase EVs.  Innovative regional initiatives are needed to make it sustainable but this will require co-ordination, funding and wider social media outreach. 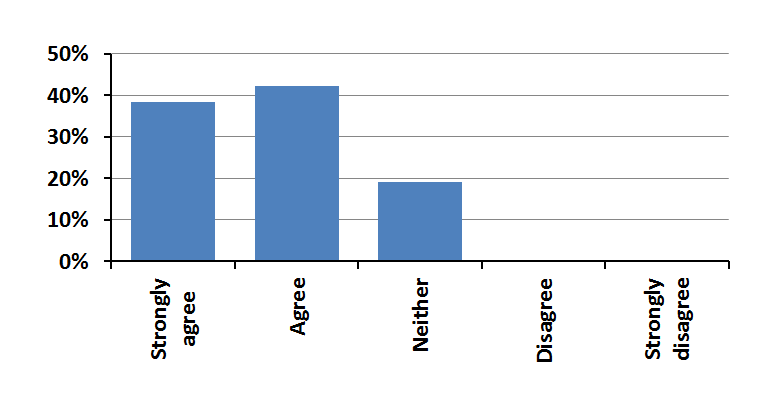 This month’s poll:   Flip the Fleet’s seventh 1-click survey invited your response to the following statement: “#LeadingTheCharge reached a lot of potential purchasers of EVs that would have been hard to reach by other means” • The poll was sent on 10 May 2017 to 76 Electric vehicle owners who are testing Flip The Fleet’s software • 52 people responded by 17 May • 10 provided 26 reasons for their choice • we eliminated the score of a respondent who said they did not know what #LeadingTheCharge was.

What makes you Click?   Most (81%) of the test drivers of the Flip the Fleet dashboard think that #LeadingTheCharge reached a lot of potential EV purchasers that would have been hard to reach by other means.  However, some saw the goal was more about giving prospective buyers the confidence and information to nudge them into buying an EV – the final push in a longer and more complex process. Being able to talk to knowledgeable EV owners was excellent, and test drives were winners. Seeing the new models and super EVs pulled the crowds.  The impact of #LeadingTheCharge may be greatest in the regions where there are very few EVs so far – a critical seed for kick-starting growth of a local fleet. Perception of the media coverage was variable – some were pleased and others disappointed. Synchronised advertising and social media beyond EVs own networks could add impact.  One respondent warns that getting media engagement will get harder as EVs get more commonplace and less news worthy, and one was worried that the event is not sustainable in the longer run because of the time and cost of the organisers. There is a need for national funding streams, innovative support and events of regional EV owners groups to keep momentum up. Overall the event was positive and Flip the Fleet members were impressed and grateful for the commitment and efforts of the dedicated leaders that made the trip happen – thanks!

Below is an edited summary of comments by respondents. Please now add discussion to this Blog to sharpen our collective strategy for next year.  Also please suggest questions to ask of your fellow EV owners in future 1-click surveys – email your requests to Henrik at henrik@ecosystemsconsultants.co.nz or Dima at dima@powerstats.co.

Hearing from the owners:  “It is hard to imagine any other kind of publicity being as effective as this ‘hands-on’ opportunity for potential EV purchasers to view vehicles and ask questions of knowledgeable owners”

Sealing the deal:  “Rather than ‘reaching’ potential buyers of EVs, Leading the Charge gave opportunities for those who had already heard about EVs to experience them and to speak to those that had already committed to using them.  If you like it pushes those already ‘reached, further along the path to committing to purchase” • “Seeing a cluster of EVs together has got to build confidence amongst anxious potential purchasers – so, like Flip the Fleet actually, LtC is a good way of getting them rolling over the EV start line” • “The trick is to push the fence sitters off their perch and to commit to ditching dirty diesel. Bring on the carbon tax!”

Working the media:  “#LTC received a lot of press from what I could see – their PR machine must be pretty good!  Nice work”  • “LtC creates an opportunity to create an event around their presence in the city” • “There was little TV coverage which would have reached more people interested in EV’s. There should have been nightly updates of the journey. Press coverage was light, and reliance on the web site was not sufficient exposure” • “I was disappointed by the relatively low coverage in mainstream media to attract a bigger crowd, in Dunedin at least” • “Turn out for the Hastings rally was not great.  I think it could have been better promoted in the local press and radio.  I know it is another expense but surely worth it after making the effort to be there? • “Generating publicity through LtC will get harder from now on as the simple presence of EVs becomes common place. We are going to have to get more inventive with a variety of events organised by us locals, and threaded together by the LtC convoy, to get media attention in future”

Synchronised advertising and pushing the social networks:  “An obvious way to add value to everybody’s EV advocacy investments is to synchronise LtC and other advertising.  It was great to see EECA’s TV adverts appearing about the same time, but maybe working the other social networks would help – it will be important to reach out beyond our own EV Owners clubs and LtC’s own website” • “Post a schedule of time somewhere – I got lots of requests from people that heard something was happening, but not where. Perhaps an application to EECA for some pamphlets (or perhaps that happened)”

Test drives captivate: “I think a very important part of LeadingTheCharge is offering test drives to everybody. That’s the best way to convert strangers to EVs”

Premier & new EV models have pulling power:  “LtC allows a wide variety of cars to be displayed- plus the Tesla rock stars are a real pull” • “It was great to see the Hyundai Ioniq and get a chance to talk to the distributers.  Last year it was the Tesla that blew my socks off.  What will you bring us next year then?”

Reaching out to the regions:  “The impact of LtC is particularly important in the small to medium size towns where the EVolution is just getting going and a critical mass of local EV owners is not yet in place to create its own visibility and momentum – triggering purchase of two or three more EVs in a community with none or a few is a critical seed for growth”

Local support is crucial: “Next year we will have a traffic management plan – have sourced costs and promise of funding – so we can have test drives from the Octagon – that part of the event planning was very irksome this year”

LtC drivers are national heroes!  “I’m gobsmacked that leaders of our EV advocacy groups took so much time out of their busy lives to spend weeks on the road – hats off to you all.  The real cost if you take peoples’ time into account must have been large” • “The road-trips have been a significant contribution from a small number of EV owners and EV interests, but a national road trip is not a long-term proposition, it is too onerous. It could survive as a series of regional initiatives, but this would require a national body of sorts, with a funding stream”.

Overall a good vibe: “Comments and questions asked by those who came were ALL positive. I didn’t meet a single EV sceptic”