We are constantly blown away by the innovation and thought that many early adopters bring to the challenges of battery electric vehicles.  Each citizen scientist is contributing valuable evidence to help others.

One set of battery ‘State of Health’ (SoH) measures hit us straight between the eyes!  An Auckland owner of a 2012 (24 kWh) Leaf has recorded remarkably steady SoH measures using LeafSpy.  It has dropped by just 1% in nearly four years!  The average decline of 24 kWh Leafs over that time would have been around 11%.  His records are ringed in the figure below.

And his actual records are here: 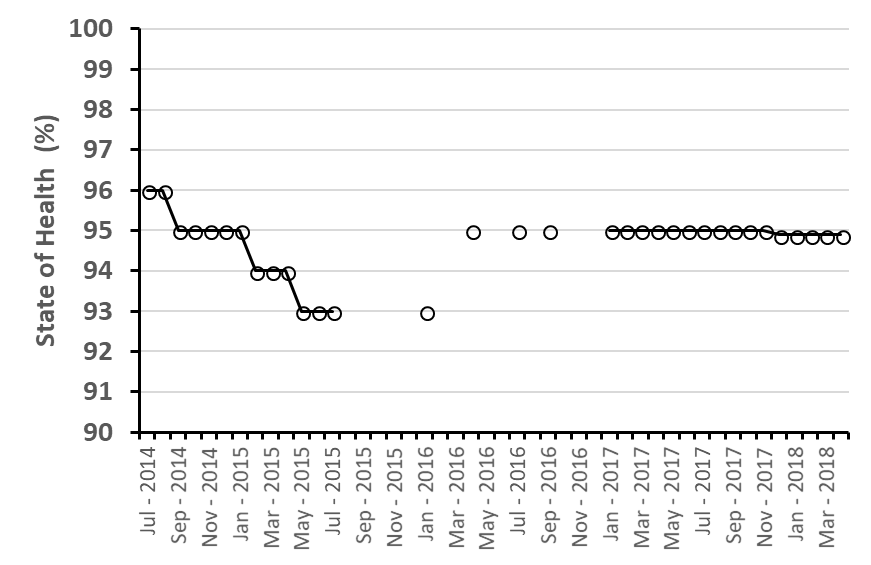 We asked the owner for details so we can all learn what leads to his success.  This is his story:

My Leaf was built in May 2012 for the Australian market, and I bought it from Nissan NZ as a new vehicle in July 2014, one of the relatively few NZ-new Leafs. Given its price and warranty I have always been keen to make it last as long as possible, despite general perceptions about limited battery life. It has been fully serviced by the distributor, covered 10,957km, been fault -free, is original including the 12 volt battery, and is now 6 years old.

I read Leaf posts and articles extensively online before purchase, which summarised to: a great town car, but best avoided for regular long distance traveling. So my first decision was to buy a Leaf for local use only, using my 2nd vehicle (a Prius hybrid) for highway journeys. As I was no longer commuting, this was, and remains a good fit.

All of the Aussie Leafs whose owners identified SOH at purchase, on the OzLeaf forum, were between 94-98%, despite the 2-year storage.

The first month I didn’t have Leaf Spy, and my charging regime started as recommended by Nissan – 80%, recharged from LBW. Meanwhile my reading was recommending frequent part-charging and shallow depth-of-discharging, and It soon occurred to me that, given my very light use (typically 50-60km/week) that I was only charging a couple of times a month at most. With Leaf Spy I started keeping a record of battery data at each charge, and after another month it was clear that degradation was occurring. I charged to 100% a few times which temporarily reversed the numbers, but also lengthened the time between charges.

After 3 months I decided to move toward charging for actual use, rather than just “filling the tank”. Further reading about li-ion battery storage suggested an optimum charge level about 30-40%, so my first decision was to do a short charge using the car timers if charge level dropped below 30%. This sometimes resulted in a charge level above 40%, sometimes below. Over the next few months I kept Leaf Spy charge records, and this eventually revealed the basis for what is now my current charging regime – over 100+ charges, for those to more than 40% SoC, about 3/4 showed a little degradation, while those to less than 40% were all stable.

There was a step back up to the 95% level in April ‘16 – it was a by-product of applying the P3227 battery update, which elevated AHr and SoH about 2%,  though Hx declined.

So my decision was to institute sub-40% charging to see if it was adequate for my local travel requirements, and it soon proved to be so. A recent test using 8.37 km/kWh, in ideal conditions, a 39% charge, gave an actual range of 42 km to VLBW, 57km to dead on the road (Leaf Spy estimate). In winter I reckon on 35km to VLBW, though I have never got down that far in normal use.

These changes were fully implemented by April 2015, and since then Leaf Spy battery metrics have remained stable.

The goal was to minimise battery degradation using optimum charging practices, identified as shallow depth-of-discharge, frequent part-charging, and as far as possible to keep charge level at or below a level considered best practice for storage (30-40%). Web discussion papers suggest that li-ion batteries are most stable at 3.92 cell voltage; a SoC level of 39.0% gives a maximum cell voltage of 3.925v for the Leaf under discussion.

Typical use is 10-15km per trip, occasionally 20-25km, in use 4-5 days/week, all city running, mostly 50-60kph. Up to 40+km per trip are available in summer, 35+km in winter, for this usage, assuming discharge to VLBW is acceptable. Given the short distances, a trip in the morning, a part charge during lunch, followed by another trip, is easily completed.

Use is predictable, so the car battery is maintained at no more than 39% SoC, and charged after every trip. The car timers are used to charge for 1 hour at any time to suit, as low levels of charge do not require re-charging just before use. Leaf Spy is needed to identify how much charge is needed, so as to avoid exceeding the desired level. This is managed using a 6/10/16A EVSE, at 16A if SoC is <=17%, 10A if SoC is <=26% and 6A if SoC is <= 31% – all that is needed is to set the level at plugin. Occasionally a manual top-up is used to round off, but must be monitored!

What does this tell us all?

We realise that not everyone has such a steady and relatively low mileage as this owner.  But this track record shows undoubtedly that the drivers of battery degradation relate to charge levels at storage.  The case study is a useful reminder to not keep your Leaf battery topped up to brim when you don’t need to. This need not be an “all-or-nothing” approach – any days where a Leaf is kept below 40% charge will extend the battery life.  In particular, keep it stored at low State of Charge if you are going away for a long period.  Car dealers could well heed this teacher’s advice by keeping the Leafs at low charge during transit from Japan or UK, and while on the forecourt awaiting sale.