Our fifth 1-click survey invited your response to the following statement: “NZ will reach its target of 64,000 LEVs by 2021”.

You can download a 1-page summary of the results with a graph of EV owners’ responses here: 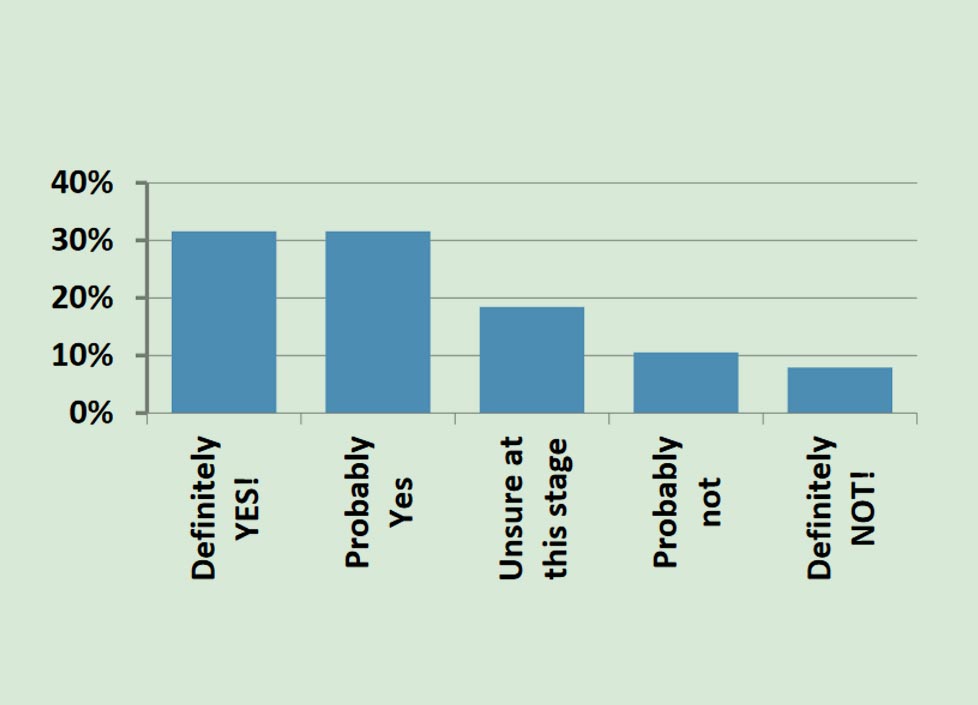 Most of the test drivers of the Flip the Fleet software think that the government will reach its target of having 64,000 Low Emission Vehicles (LEVs) registered in New Zealand by 2021. Amongst 38 respondents, 63% of respondents thought that we would ‘definitely’ or ‘probably’ achieve the target.  The sample size is too small to estimate the size of the majority, but there is less than a 0.1% chance that this majority signal arouse by chance (sampling error).  Nevertheless, 18% are still unsure whether the target is achievable, and 8% believe that the target definitely cannot be achieved without more active leadership and investment in reducing the barriers to purchasing LEVs and longer term planning.

More optimistic respondents believe 64,000 LEVs by 2021 to be a soft target, partly because flipping the fleet over to LEVs is somewhat inevitable.  More sceptical respondents worry that there will be insufficient supply of inexpensive LEVs to encourage uptake, especially in the face of increasingly stiff market competition from Internal Combustion Vehicles (ICVs). Inclusion of PHEVs greatly increases chance of success, but targeted intervention to maximise the proportion of LEVs that are fully electric is needed. Increased investment in demonstrating the utility of LEVs and making them more visible would help. Roll out of public charging infrastructure is slowing because of increased safety and regulatory burdens.  Encouraging fleets of new LEVs is important, but more investment in encouraging uptake of LEVs in the private sector may be needed to reach the target.

Read the one-page summary for a sample of the most common themes.  Below are additional comments that we couldn’t fit in that summary.

Plan now for the long haul: “Targets are only useful if they offer some stretch to spur better progress.  In the meantime let’s not be lulled into a false sense of security by the uptake by early adopters and instead get down to serious work and investment to keep the ball rolling in 2020 and 2021” • “until we see intervention and longer term planning beyond early adoption, I’m sceptical that we’ll make 64,000 by 2021”

Investment needed to concentrate on EVs rather than PHEVs: “The target is soft because it includes the Plug-in hybrids, which may have marginal environmental benefits over their full life cycle” • “Counting PHEVs will be a key factor to meet the target”

Internal Combustion Vehicles provide stiff and growing opposition: “Key barrier of high purchase cost unaddressed in NZ’s EV  programme” • “without a govt subsidy EVs will remain  unaffordable for most people” • “Fossil fuels are very competitively priced at present, and likely to remain so in the current geo-political climate – US shale oil has made America the world oil supply leader, and with Trump at the helm, likely to remain so through his term”  • “As more overseas jurisdictions switch to EVs we’ll be even more inundated with cheap ICVs that can outcompete with EVs, especially when the petrol companies don’t have to pay the real cost for oil and cleaning up their damage”

Government must invest and lead more strongly: “Government is not giving any incentives to improve EV purchase” • “there should be more advertising and promotion etc. to spread the benefits of EVs to a wider public” • “There isn’t enough government support for EVs or any system that saves fuel and electricity” • “Not enough support from Transit Authority’s trial of priority for EVs on Auckland motorway on-ramps – it was the smallest move they could make”

Thanks Mum!  “I think Flip The Fleet is doing an awesome job”